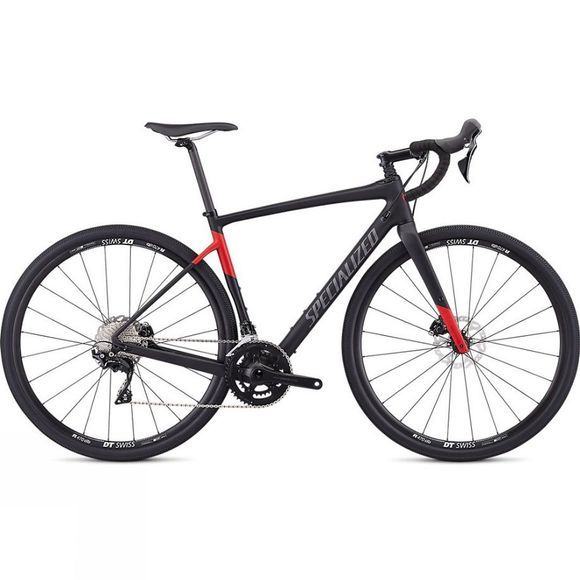 (2 reviews)
This product is not available

With the Diverge Sport 2019, you'll be prepared for anything the road throws at you, from smooth tarmac to the most chewed-up tracks out there. It's packed with all the same technologies as its pricier cousins, only its spec places an emphasis on reliable performance, not components so flashy you'll be eating nothing but top ramen for months.

The Diverge is more capable than ever. And with the constant goal to best meet your needs, Specialized took your number one request into account—tyre clearance. The new frame will comfortably fit up to 700x42mm (or 650b x 47mm) tyres with plenty of room for mud, too. Along with tyre clearance, weight was a large factor in the development, and taking some design cues from the development of the Roubaix, we developed a FACT 9r carbon frame that’s one of the lightest in its category.

Next up, Specialized moved away from a traditional ‘cross geometry, instead opting for something that hasn’t been seen before—our Open Road Geometry. You can think of it as a road version of modern trail bike geometry. It provides playful handling and predictable steering for endless dirt skids and mid-corner drifts. The geo features a bottom bracket that's over a half-centimetre lower than the previous Diverge, a slacked-out head tube angle, short chainstays, and a short wheelbase. These changes make for a bike that's not only fun in the dirt, but also performs well on the road.

And while riding gravel and dirt roads on a road bike may add to the adventure, there’s only so much that wider tyres with lower pressures can absorb, in terms of bumps. With this in mind, we implemented a new version of our Future Shock into the Diverge design. It not only soaks up bumps with ease, but also adds the benefit of extremely predictable handling. That's because the wheelbase isn’t lengthening when you hit a bump, so the front end of the Diverge keeps the same effective head tube angle. In other words, when you dive hard into a turn, you won’t

Not The Bike For You?

We have a wide range of urban bikes available for all experience levels from a vast range of different brands.

You May Also Need...

Ensure you're fully kitted out for your next ride.

We want you to be happy with your purchase. If you wish to return your goods, then you can do so by visiting one of our stores, sending the product to our refunds department, or by taking it to a Collect+ store within 30 days of receipt.

Unwanted items should be in new condition, with the original packaging, labelling and with a Cycle Surgery receipt. A refund request will usually be actioned within 7 working days from receipt. Please note, for unwanted items, you are responsible for paying all return postage charges.